Six Downloadable PlayStation 4 Games to Play with the Family

There are dozens upon dozens of games available to download for the PlayStation 4. This includes many digital exclusives that are much cheaper than their disc-based counterparts. We’ve gone through our favorites and picked six downloadable PlayStation 4 games under $20. All of these games are family-appropriate and designed for two or more players. Some let you work together, while others create competitive scenarios that families can enjoy together. Whatever the case, these games will get you playing together in a hurry without huge expense. You don’t need to buy microphones to enjoy this singing game. After downloading a free companion app for iPhone or Android phone, SingStar will use your device’s microphone to wirelessly power the singing on your game console. Better yet, two players can do so at the same time using separate phones.

The SingStar game is a free download with a handful of free demo songs available. Beyond those, you can buy just the songs you love—either individually or in bundles. You can sing along to top hits from One Direction, Bon Jovi, Lady Gaga, and more, with both players trying to match the pitch of a song while the music video plays in the background. It’ll get the party started, even if it’s just you and your kid. 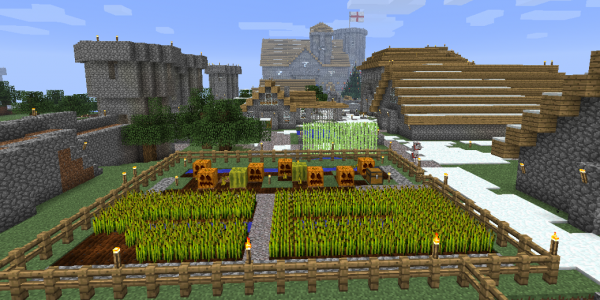 The block-based building sensation is now available on PlayStation 4, and it’s one of the best versions around. You can enjoy local four-player split-screen play—with each person having a separate quarter of the screen (and a controller.) The PlayStation 4 version also offers larger worlds to explore than you’ll find on PlayStation 3.

Otherwise, Minecraft is as simple-looking, yet totally engrossing as ever. The world and all characters and creatures are made from pixelated blocks. Found in the sparse landscape are adventure, surprises, and the chance to build amazing structures piece by piece. Minecraft resonates with modern kids much like Legos did for past generations. The best part is that you can play it all together. That’s why it’s such an inviting experience on PS4. Sony’s MLB: The Show series is great, but if you’re not into super-serious simulations—or a $60 baseball game, for that matter—then Super Mega Baseball may be right up your alley. As the title suggests, it’s not as stuffy or realistic as officially licensed games can be. Instead, Super Mega Baseball offers up teams full of men and women with cartoonish looks and names, along with larger-than-life stadiums.

It’s an ideal game to play with the kids. They can polish their skills by playing against the computer (with customizable difficulty settings.) Then you can have up to four players—each with a controller, two per team—battle it out on the virtual diamond. This game is a great way for parents to introduce baseball to kids, and it’s a lot of fun for all ages. Chariot starts with a grim premise, but it uses that to deliver one of the most charming cooperative games available on PlayStation 4. You play as a princess and her fiancé attempting to find a final resting place for her recently departed father. But his ghost appears to inform you that the chosen location isn’t up to his standards. So off you go into the Royal Catacombs.

The couple must work together to transport the king’s remains across chasms and through hazards. While you can play it alone, Chariot becomes a lot more interesting with a second player in tow. You’ll have to work in unison to safely move the rolling casket past any hazards that emerge, giving this side-scrolling game a strong puzzle-solving element. Sportsfriends is a wonderfully amusing collection of simple, competitive sports mini-games that support between two and four players. BaraBariBall has players battling to toss a ball in the opposing goal area. Super Pole Riders sees each team trying to swat a ball with a pole towards a goal. And Hokra finds teams bumping each other to keep a ball in certain parts of the screen. They have core similarities, yet they’re all pretty different in execution.

And the last game, Johann Sebastian Joust, doesn’t even use your TV: it has each player hold a PlayStation Move motion controller as still as possible while opponents try to make them flinch. All four are excellent multiplayer games, and the simple gameplay mechanics make them easy to learn and enjoy time and again.

The world’s most popular puzzle game is probably best known for its handheld entries. But Tetris is also available for PlayStation 4 in a very affordable version. Tetris Ultimate builds upon the same line-making experience seen in previous games over the last three decades. Various local multiplayer modes make this classic very appealing for your family.

Up to four players can each grab a gamepad and jump in. You can battle it out to complete the most lines (while clogging up competitors’ boards with tricky block patterns) or work together in team-based showdowns on larger boards. Tetris Ultimate thankfully maintains the pick-up-and-play formula that’s made the series such an enduring favorite, and it lets you match wits with puzzles on the cheap.